How Miranda Violations May Impact Embezzlement Charges In Austin, Texas 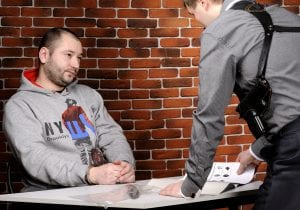 This is the next post in my series on the handling of embezzlement charges in Austin, Texas. My last article discussed how search and seizure issues may impact an embezzlement case. If law enforcement officials obtain evidence in violation of a defendant’s Fourth Amendment rights, then it may be possible to have such evidence excluded from the case. Depending on the nature of the charges and other evidence available to the prosecution, the exclusion may result in a dismissal of the charges. Defenses based on search and seizure issues are often complicated and involve a thorough understanding of Fourth Amendment rulings. It is imperative, therefore, to retain criminal defense counsel experienced in such matters to represent your interests. In this article, I will discuss how the violation of one’s Miranda rights may impact one’s defense against embezzlement charges. If you need assistance, contact my office today to speak with a lawyer.

Thanks to the popularity of legal dramas on television and in the movies, most Americans are familiar with their Miranda rights. Memorialized in the Supreme Court’s Miranda decision, the Fifth Amendment of the U.S. Constitution provides individuals with the right to remain silent and to have an attorney present if they are questioned while in police custody. Many people are not aware, however, that an individual does not have to be formally placed under arrest to be in custody. Instead, a person will be considered “in custody” at any time when they have been stopped by law enforcement and reasonably believe that they are not free to leave. Officers must inform an individual of their Miranda rights when they are in custody. If they do not and a suspect makes incriminating statements, then it may be possible to have such statements ruled inadmissible in court.

It is not difficult to imagine a situation in which law enforcement officials violate the Miranda rights of a person suspected of embezzlement. For example, suppose police raid an office building and inform a suspect that they wish to interview him. They isolate the individual in a conference room guarded by an armed officer. Under such circumstances, the person may feel they are unable to leave the room and have no choice but to speak with the police. Without first informing the individual of their Miranda rights, an investigator begins to ask questions about the company’s financial transactions, the person’s role in handling money at work, and what the individual’s intentions were at a given time. The employee is nervous and, as a result, makes several incriminating statements to the police. The officers arrest and charge the individual immediately and, only then, provide the Miranda warnings. Upon review of the case by the accused’s defense counsel, potential violations of his Fifth Amendment rights are identified. The attorney quickly files a Motion to Suppress the statements made prior to his being informed of his rights. If successful and depending upon the existence of other evidence against the defendant, it may be possible to exclude the statements and seek dismissal of the charges. It is important to note that a court’s ruling in any given case is dependent upon the specific facts of the situation.

Given the severity of the penalties for an embezzlement conviction, I cannot overemphasize the importance of contacting an Austin criminal defense lawyer as soon as possible if you face such charges. I am certified by the Texas Board of Legal Specialization as a specialist in criminal law and take pride in vigorously defending my clients. In addition to Austin, I also serve the cities of Rollingwood, Round Rock, Elgin, Jonestown, Manor, Bee Cave, Lago Vista, Sunset Valley, Lakeway, Creedmoor, Georgetown, Cedar Park, Leander, and San Marcos, Texas.