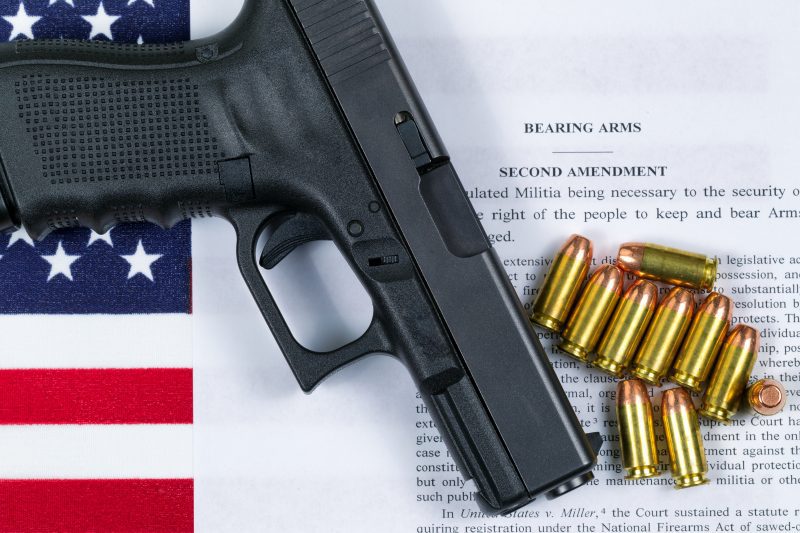 It is hard to watch the news without hearing about a gun-related crime somewhere in the United States. While many people have strong feelings about the right to bear arms, the fact of the matter is that there are strict penalties associated to the use of a firearm during a crime. If you are charged with an offense which involved a gun then you can expect that prosecutors will aggressively pursue the matter, that the Judge will have little sympathy for your case, and that you will be at risk of incarceration. It is crucial that you retain a criminal defense attorney familiar with such cases. Dan Dworin is an Austin lawyer who strongly believes in defending the rights of the accused. He is certified by the Texas Board of Legal Specialization as a specialist in criminal law and has been practicing since 1995. Do not risk your future to a lesser experienced law firm. Call our office today to schedule an initial consultation.

It is illegal in Texas and throughout the U.S. for a convicted felon to possess a firearm. Simply possessing a gun after having been convicted of a felony or domestic violence can result in one being arrested for violating Texas Penal Code §46.04 and 18 U.S.C. 922(g). This means that one can face state or federal criminal charges even if they did not own the firearm; simply “possessing” it is enough for a person to be charged. Under Texas law one will be charged with a third degree felony for possessing a firearm within five years after having completed their requirements for a prior felony conviction. The potential penalties for a third degree felony include a sentence of two to ten years in prison and a fine of up to $10,000. This punishment will potentially be in addition to that related to any other charges a defendant may face. A defendant who is convicted in federal court will be subject to the U.S. sentencing guidelines. Dealing with such cases can involve complicated issues and it is important to retain an experienced attorney.

Dan Dworin is an Austin lawyer handling cases in which a felon possessed a firearm. Once retained Dan will enter a “not guilty” plea on your behalf if a favorable resolution cannot be reached. He will quickly obtain all discovery from the prosecution and begin an investigation of the matter. Many cases involving unlawful gun possession revolve around search and seizure issues stemming from how law enforcement obtained the weapon. If Dan believe that the police violated your rights then he will file a motion to exclude any evidence gained by law enforcement’s violation of the Fourth Amendment. If such a motion is successful then, in some instances, the case may be dismissed. If necessary then Dan will prepare your case for trial and make sure you know what to expect from the process as matters move forward. Our office believes that everyone is entitled to a vigorous defense and we are ready to assist you. Contact us online or by telephone.

Many people face firearm charges even if they have not been convicted of a prior felony. These charges often arise in the context of a gun being used during the commission of another crime. Examples of such crimes may include drug trafficking, armed robbery, aggravated assault, domestic violence, etc. In many cases, a person who otherwise has every right to legally possess a firearm can be charged if they are accused of committing another offense while possessing the firearm, including Driving While Intoxicated or Possession of Marijuana. This law also applies to individuals with Texas Concealed Handgun Licenses. Dan is an attorney who understands the impact such charges can have on one’s future. This is why we ensure that the rights of our clients are protected from the moment we are retained. We understand that you are facing a serious situation and we will take it seriously.