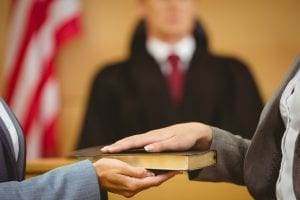 This is the next post in a series of articles discussing defending against aggravated assault charges in Austin, Texas. My previous article addressed the possibility of precluding the admission of eyewitness identifications in such cases. If it can be demonstrated that the police engaged in suggestive practices when interviewing the witness and that the testimony is otherwise unreliable, the witness’ identification may be excluded from the case. Depending upon the facts of the case and the existence of additional evidence, the exclusion of this information may result in the dismissal of aggravated assault charges. This article will address another common issue that arises in such cases: violations of a suspect’s Fifth Amendment rights. Challenging the admission of evidence based on improper actions of law enforcement can be complicated. An experienced criminal attorney will help identify whether such strategies may exist in your case. If you need assistance, contact my office to speak with a lawyer.

The Fifth Amendment of the United States Constitution guarantees individuals who are in police custody the right to remain silent and to have a lawyer present while being questioned. Law enforcement officers are required to inform such individuals of these rights, known commonly as Miranda rights, when they are “in custody”. This is important because self-incriminating statements made by a suspect who is in custody before they have been informed of their Miranda rights may be excluded from evidence. One is considered to be in custody at the moment an average reasonable person in the same situation would not feel free to leave, which often occurs prior to the point at which the person is arrested. For example, if an individual is being interviewed by the police while they are in the back of a police car with the doors closed, that person would likely be considered to be in custody. Particularly in situations involving violent crimes, such as aggravated assault, Fifth Amendment defenses can have a significant impact on the outcome of the case.

Aggravated assault defenses often involve violations of the Miranda requirements for a variety of reasons. First, many allegations of assault involve altercations without witnesses. For instance, a fight within a person’s home or an assault on an individual who was alone may only involve the suspect and the alleged victim. Police responding to such events very often separate the parties to interview them about the events. It is easy to imagine a circumstance in which a suspect is technically “in custody,” has not been provided with Miranda warnings, and willingly speaks to the police. Incriminating statements made during that time may lead to their arrest. For example, after responding to a report of a fight at an apartment building, the police move Joe and Bob into separate police cars to be interviewed about the event. The officers do not provide Miranda warnings to either person. Bob accuses Joe of threatening him with a firearm. Joe confirms during his interview that he did so and he is arrested. His defense counsel will likely file a motion to exclude Joe’s statements made in the police car because they were given in violation of his Miranda rights. In this case, Joe and Bob were the only individuals present and no other witnesses can be identified. Excluding Joe’s statements may, therefore, result in the dismissal of the charges entirely. The potential impact of a defense based on Miranda violations will depend on the specific facts of each case.

Constitutional defenses can involve complex legal and factual arguments. It is important to retain counsel with the experience necessary to clearly and effectively make such arguments on your behalf. I have been practicing since 1995 and am certified by the Texas Board of Legal Specialization as a specialist in criminal law. Contact my office today to speak with a lawyer. In addition to Austin, I also serve the cities of Rollingwood, Round Rock, Elgin, Jonestown, Manor, Bee Cave, Lago Vista, Sunset Valley, Lakeway, Creedmoor, Georgetown, Cedar Park, Leander, and San Marcos.