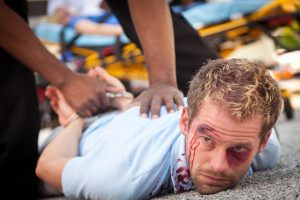 Our society does not condone private violence and punishes one who does harm to another. This is why assault charges will quickly be dealt with by Texas law enforcement and prosecutors. Whether you are charged with a misdemeanor or a felony it is important to understand that being convicted can result in incarceration, fines, a permanent criminal record, and the inability to pass a background check. If you or a loved one are facing charges then you should contact a lawyer immediately. Dan Dworin is an Austin criminal defense attorney handling aggravated assault charges. Dan is certified by the Texas Board of Legal Specialization as a specialist in criminal law and aggressively protects the rights of the accused. Contact our office today to schedule an initial consultation.

Under Texas law an assault occurs when one threatens or touches a victim against their will. A defendant will be charged with a misdemeanor if no harm occurs but will be charged with “aggravated assault” if a serious bodily injury occurs or if a deadly weapon was involved. Aggravated assault will typically be charged as a second degree felony, which carries a sentence of two to twenty years in prison and a fine of up to $10,000. The offense will be elevated to a first degree felony if the victim was someone with whom the accused is in a domestic relationship or if the victim was a police officer, an elected official, or from another class of protected individuals. A first degree felony assault will carry a potential sentence of five years to life in prison.

Aggravated assault cases generally begin with the arrest of the defendant, closely followed by a prosecutor presenting evidence to a grand jury. As in all felony cases, our office believes that aggressive investigation and presentation of favorable facts to the District Attorney can often lead to charges being rejected by the grand jury. If the case is indicted, the prosecution will provide the defendant’s counsel with all evidence which they are required to disclose, including evidence showing the defendant may not be guilty or that would show he deserves a lenient sentence, under Brady v. Maryland. Defense counsel will investigate the matter and file requests to exclude any evidence, obtained in violation of one’s rights, from trial. If a resolution is not reached then the matter will proceed to trial before a jury. If the defendant can show that there is a “reasonable doubt” about whether they committed the offense, or if they were acting in reasonable self-defense, or reasonable defense of their property, then the jury will return a verdict of “not guilty.” If the defendant is convicted, the he or she has the right to choose judge or jury sentencing.  This is a complicated process and it is important for the accused to hire a qualified attorney.

Dan Dworin is an Austin lawyer representing those charged with aggravated assault. Prior to an initial consultation he will make an effort to obtain all available public records relating to the incident so that he may then have an understanding of what happened. He will then use the consultation to make sure you understand what to expect from the process and to begin formulating a defense. After the discovery has been obtained then, if it appears that there was any illegally-obtained evidence collected by law enforcement, he will file motions to prevent the use of eyewitness identifications and of any statements that were collected in violation of the Fifth Amendment. Dan will fully investigate the matter and if a resolution cannot be reached then he will ensure that you are prepared for trial. Our office will be in regular communication with you throughout the process, will make sure you know what to expect as the matter proceeds, and Dan will be available to answer your questions. You are facing a serious situation and we will give it the attention it deserves.

Austin residents have enough to worry about if they have been charged with aggravated assault. The performance of their attorney should not be another cause for concern. Dan has been defending the rights of the accused since 1995 and believes that everyone is entitled to an aggressive defense. As an example, if Dan believes that you have a legitimate self-defense claim and your case has not yet gone to the Grand Jury, then our office will contact the prosecutor and attempt to convince them that they should not proceed with filing charges, or at the least to present all favorable evidence to the grand jury to seek a “no bill,” or refusal to indict, which ends the case. This is just one example of how we feel we go the extra mile. Contact us online or by telephone.